Most early boomers remember Burma Shave, but probably more for the signs than the actual product. Those family road trips weren't quite as boring if you could spot that first one liner, and then watch for the punch line a few signs later!

So who knew what Burma Shave really was? A brush-less shaving cream first introduced in 1925 by the Burma-Vita Company in Minneapolis. But sales were slow early on, and the only way to perk them up was by advertising. A young man by the name of Allan Odell convinced his father Clinton (who owned the company) that roadside advertising was the way to go, coinciding with the early popularity of the automobile and road trips. The campaign succeeded, ultimately pushing Burma Shave to the second best selling shaving cream at its peak. 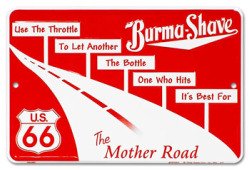 In place generally from 1926 until 1963 in most states around the country, Burma Shave signs advertised the product by making fun of Grandpa's old fashioned shaving cream that still needed a brush. Over the years, some of the signs went beyond just advertising the product, taking on a public interest by encouraging safe driving, but always with clever humor and rhymes. Allan wrote most of the early signs himself, but soon the family started offering cash prizes up to $100 for others to submit their own home-spun messages.

The advent of the interstate highway system in the 1950s would make it a lot tougher for small signs to catch the eye of drivers now going faster. When Burma-Vita was acquired by Phillip Morris in 1963, the signs were discontinued on the advice of legal counsel. But at the height of their popularity, there were some 600 Burma Shave messages displayed on 7000 signs across the country, and the signs were changed out once a year by a sign crew operating with just eight trucks. As one sign aptly put it, "If You Don't Know / Whose Signs / These Are / You Can't Have / Driven Very Far".

Some of the jingles simply advertised the original product:

Other jingles advertised a new addition to their product line:

Many of the jingles pushed the product to improve one's love life: 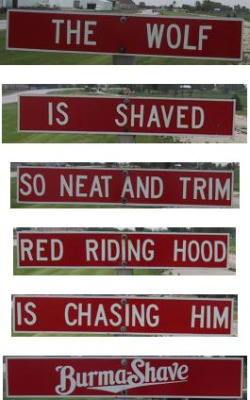 As a company, Burma Shave seemed to appreciate its position along the side of the road, and hence a responsibility to promote safe driving (you don't see a lot of billboards doing that today!):

In fact, some of the messages took particular aim at driving while intoxicated:

Other messages encouraged both hands on the wheel while driving:

Readers could find references to the military, especially applicable during the war years:

Always in good taste, some messages mixed humor with a bit more color:

Ultimately, roadside advertising for Burma Shave became so successful that the signs themselves almost seemed more important than the product they advertised: 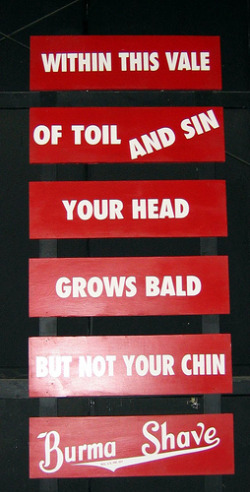 And finally, when the signs had run their course, perhaps the most poignant message of all: